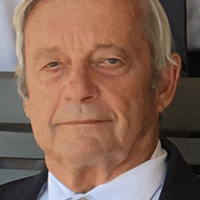 Born in Akron, Ohio, April 4, 1939, Jim was the only child of Dr. Paul and Leona Maxwell. Raised, as he put it, “on the wrong side of the tracks” in Champaign, Illinois, Jim excelled in football, swimming, and pole vaulting at Champaign High School, winning conference championships in each sport   Jim pole vaulted, using a red metal Gill Vaultmaster pole he “found” in the backyard of his neighborhood idol—two-time Olympic Gold Medalist Bob Richards, the first man on the Wheaties box.

After graduating high school in 1957, Jim played football and pole vaulted at the University of Southern Illinois, until “fate” sparked his journey to Mississippi.  In 1959, after a “wild trip” to New Orleans, a wrong turn in Jackson landed him on Mississippi College’s campus.  He had never heard of the Choctaws, but he learned they had a football program—and, more important, no college algebra requirement.  So after returning to Illinois, he “loaded up his 1954 Glass-Top Ford, butchwaxed his flat-top hairdo, cranked some Chuck Berry, and on a whim headed South to MC.”  Shortly after he enrolled at Mississippi College, in early February 1960, an infamous brawl broke out during a basketball game between MC and Millsaps,  Still unknown by many of his new football teammates, Jim fought students from both schools, “slugging his way through the gym and doing well, only losing one shoe.”  Jim loved MC, calling it the “best college in Mississippi and much wilder back then than most people think.” He played center on the football team and pole vaulted for the track team.

Mississippi College eventually allowed Jim to graduate in 1963.  He then received an MBA and played football one year at the University of Southern Mississippi.  He served in the United States Army before joining Traveler’s Insurance Company in New Orleans.  An adjuster by day, Jim attended night school at Loyola Law School, graduating in 1969.  He became licensed in Louisiana, Mississippi, and New York.  A date in Metairie with a young school teacher, Ruth “Bebe” Bryant of Derma, Mississippi, led to their marriage in 1973.

Jim cut his legal teeth as a personal-injury lawyer at the Trombotore and Vondonstein law firm in Kenner, Louisiana.  Soon after, he accepted a second job as Assistant District Attorney with legendary Jefferson Parish DA John Maumolides.  Jim quickly forged a reputation as an exceptional trial lawyer.  During his higher profile trials, other attorneys, court staff, and even judges slipped away from their own courtrooms to watch Jim in action.  He received commendations from “America’s Most Wanted” host John Walsh, the FBI, Sheriff Harry Lee, the Louisiana Trial Lawyer’s Association, and the Louisiana Prosecutor’s Association.  Some of his more sensational cases are documented in written and televised publications.  Jim rose to Chief of the Felony Trials Division, while also establishing the civil law firm of Ansardi, Maxwell, and Power, which performed legal work for the City of Kenner.  Jim loved the courtroom and never retired from the practice of law.  His son, Jimmy Maxwell of Oxford, Mississippi, followed his footsteps as a prosecutor and now serves on the Mississippi Supreme Court.

In his younger days, Jim enjoyed flying his “hand-spun prop” 1943 Taylorcraft airplane, which he bought for $750.  He also enjoyed jumping from airplanes with the Jackson Skydiver’s Club.  In the late 1970s, his neighbor and friend, Joe Sirgo, asked him to go jogging.  This led to Jim’s lifelong love of running.  And in his early forties, Jim twice completed the Ironman Triathlon in Kona, Hawaii.  He participated in hundreds of races and numerous local triathlons and national marathons.  He once ran the final 7-mile leg of the Heart of Dixie Triathlon in Neshoba County barefooted, after losing his running shoes.

Jim is the first and only man on record to have successfully windsurfed “the Point” at the Wilson Street Pumping Station on Lake Ponchartrain.  He loved Mexico, including his summer home in Cancun. And he enjoyed many treks by jeep through Baja, Mexico, to camp in hammocks, surf, and “get chased by bandidos.”  In 1994, he spent ten days “hanging out” in Chiapas, Mexico, during a civil war.  And at 77, he donned a wetsuit and surfed Sunset Beach, California.  One of his favorite sayings was, “I’m a lawyer, I can do anything.”  And Jim could—except for learning how to prevent his cell phone from “accidentally” dialing you at 3 a.m.

But what Jim cherished most was time with friends and family.  He loved watching his grandchildren participate in sports, dance, and other activities.  He was a loyal friend, husband, father, and grandfather.  His knack for storytelling, adventurous spirit, and strong sense of humor will be missed but never forgotten.

Memorial contributions in Mr. Maxwell’s honor may be made to the James D. Maxwell “Ironman Scholarship” at Mississippi College, online at MC.Edu/giving or the Development Office, Nelson Hall, M.C. Box 4005, Clinton, Mississippi 39058 or you may call (601) 925-3257.

To send a flower arrangement or to plant trees in memory of
James D. Maxwell, please click here to visit our Sympathy Store.