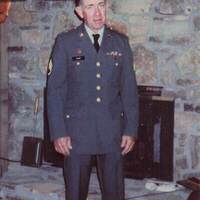 Donald Baker Camp, 80, of Banner passed from this life on Saturday, January 23, 2021 at his residence after an extended illness. Born on November 29, 1940 in Banner, he was one of three children born to the late Sanford and Hazel Baker Camp.

Donald wed his wife Phyllis Ledbetter Camp October 16, 1962. The couple spent over fifty eight years in marriage. He spent many years in the National Guard before retiring and taking care of his farm fulltime. During his lifetime of farming Donald raised a variety grain crops and cattle. Alongside farming, he was an expert welder and metal fabricator. His hobbies included searching for good deals, trading equipment and cattle. Donald was a longtime member of Banner Baptist Church.

Donald was preceded in death by his parents, Sanford and Hazel Baker Camp; one brother, Mickey Camp.

The staff of Parker Memorial Funeral Home is honored to serve the family and asks that you keep the family in your thoughts and prayers as they pass through this difficult season of life.

To send a flower arrangement or to plant trees in memory of
Donald Baker Camp, please click here to visit our Sympathy Store.