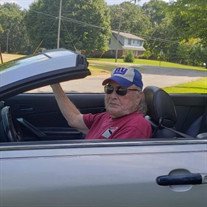 Marvin Eugene Nelson, age 80, of Sylva Rena, MS died unexpectedly Sunday, February 21, 2021, at his home. Better know as “Gene”, he was born October 26, 1940, in Arkansas. Gene faithfully served our county during two tours in Vietnam in 1967-1968. After returning home, he worked a vast array of jobs, which included the Schlitz Beer factory, running Vic’s lounge in Memphis, as well as a mechanic for Caterpillar Equipment manufacturing. He was a man that pretty well kept to himself, which afforded him time to enjoy hunting and fishing.

The family will celebrate his life with a memorial service at a later date.

Gene is survived by his wife of 14 years, Debra Nelson; four children; four step-children; one brother; two sisters; as well as his grand children and great-grandchildren.

Gene was preceded in death by both of his parents.

Seven Oaks Funeral Home is honored to have served the Nelson family.