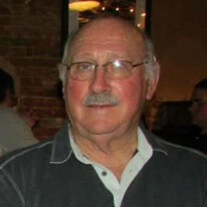 Blue Mountain, MS – George D. McWilliams, Jr., 83, formerly of West Point, died, March 5, 2021 in Blue Mountain, MS. George was born January 6, 1938 in Straight Bayou, MS to the late Zelma Lee Harper and George D. McWilliams, Sr. He was a Supervisor for Bryan Foods for 37 years. George was a member of Calvary Baptist Church. George married Joyce Ann McWilliams October 4, 1959 who predeceased him on July 21, 2017. George was a loving husband, father and granddad. After graduating form Anguilla High School, he attended Mississippi State University where he played both baseball and basketball. He continued his passion for baseball playing in the Cincinnati Reds organization from 1958-1962 and a year in the then Dallas Rangers Club. George enjoyed hunting (especially pheasant), raising Brittany Spaniel dogs, attending MSU baseball games and cooking for Bryan Foods events. It was said that he could fabricate and fix just about anything. Out of the things he enjoyed, he most cherished was his marriage to Joyce for 57 plus years and going to all of his grandchildren’s sporting events. He actually bought a camper just so he could be there for all those times.