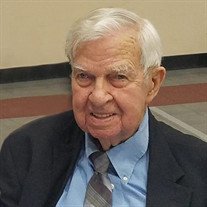 Smithville – Thelbert Junior “TJ” Armstrong, 96, finished his earthly journey and received his heavenly reward May 4, 2021. Born on July 20, 1924, in Smithville, MS, he was the son of the late Thurston and Vera Burdine Armstrong.

TJ grew up in Monroe County and graduated from Smithville High School. He was a through and through Patriot, who served in the United States Navy during World War II. He was proud of his country, had great integrity, and was a selfless, giving person. After leaving the military, he married the love of his life, Mary Inez Raper Armstrong and together they were blessed with 65 years of marriage, four children and a large extended family. He was a great provider for his family, working many jobs throughout his lifetime. He and his brother, A.V., owned and operated Armstrong Bros. Feed Store for 7 years. After that he worked 27 years driving for Eagle Motor Lines.

He loved the Lord, had a strong faith in God, and was a longtime member of Smithville First Free Will Baptist Church where he served as a Deacon for over 45 years and was the Treasurer until he received his Heavenly reward. He was awarded the Layman of the Year by the National Association of Free Will Baptists. Over his lifetime, he attended over 56 conventions of the National Association of Free Will Baptists as a voting member. He enjoyed fellowshipping at church with his church family, attending meetings, and listening to Southern Gospel and Christian Hymns.

In his free time, when he wasn’t farming, he was a very active man. Besides spending time with his cherished family, some of his close friends he liked to spend time with were Jerry and Jeanette Roche as well as Wayne and Vickie Weatherbee. TJ was the former Commander of the Disabled American Veterans chapter in Amory as well as a clerk of the NE District Association of Free Will Baptist Churches. TJ was a national member and Mississippi member of the Cattleman’s Association and a staunch supporter of the local 4H Club. Many women, in Monroe County, got their makeup delivered to them by TJ and his wife Mrs. Inez, who were Avon Representatives for many years and he continued until the age of 93. Being a Patriot, he was a longtime member of the NRA.

A giant figure in Smithville, TJ built many friendships and touched many lives through the years. The family has peace knowing he is with his Savior. The many memories made through the years are going to be recounted and treasured for generations to come.

In addition to his parents, he was preceded in death by his wife, Mary Inez Raper Armstrong; sister, Lavelle Steele; 3 brothers, A.V. Armstrong, Harold Armstrong, and Ray Armstrong; one great-grand daughter, Kierstyn Brooke Smith; and a son-in-law, Ellie McMillan.

Visitation for family and friends will be held at the church in Smithville from 1:00 pm until the service hour.

Memorials can be made to the Smithville First Free Will Baptist Church, 60008 Brasfield Lane, Smithville, MS 38870.