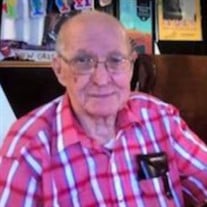 West Point, MS – Thomas E. "Pappy" Pearson, 92, went to his heavenly home on June 5, 2021 at North Mississippi Medical Center in West Point with his loving daughter and son-in-law by his side. Thomas Eugene Pearson was born September 12, 1928 in West Point to the late Nanette Thompson and Noble Samuel Pearson. Pappy was a Panel Welder's Assistant at Babcock & Wilcox for 30 years. He was a member of Calvary Baptist Church. He was a Past Worth Patron of West Point Chapter of the Eastern Star, Master Mason of West Point Masonic Lodge #40- a member for 50 plus years, Hamasa Ambassador-Tombigbee Shrine Club and Member of Corinth Body of Scottish Rites-32 Degree. He was a Veteran of the United States Army. Pappy married Faye Moore Pearson on November 19, 1955 at the First Baptist Church Parsonage in West Point. She preceded him in death on December 11, 2012. They were happily married for 57 years. Pappy was a loving husband, father, grandfather and friend to all that knew him. He was an avid Ole Miss Rebel Football fan. However, he did work the gates at Mississippi State games for the Shriners. His hobbies were being a husband, dad and grandfather.

Funeral services will be Monday, June, 7, 2021, at 2:00 pm from the chapel at Calvert Funeral Home with the Dr. James Towery officiating. Burial will follow in Palestine United Methodist Cemetery in Montpelier, MS. Calvert Funeral Home of West Point is in charge of arrangements.

Visitation will be 1:00-2:00pm prior to the service at Calvert Funeral Home.