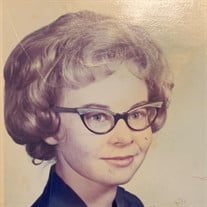 Judy Ann Sanders, 77, passed away on June 14, 2021 at Baptist Hospital, in Columbus, MS. She was born March 17, 1944 in Columbus to the late Julia Boozer and James O. "Buck" Sanders. Judy retired from Bryan Foods after 27 years. She was a member of First United Methodist Church of West Point.

Being the hard worker that she was, Judy still managed to put her family first. She was an avid reader who also enjoyed sewing, making jewelry and tending to the flowers in her garden. Judy also liked to cook but even more so she loved sharing recipes with friends and family. Those that knew her personally would also tell you just how outspoken she was. But being outspoken was only one of her many great qualities that will be missed by all.