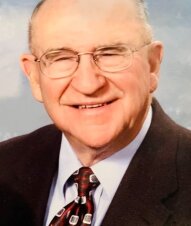 Obituary for James Harold Martin Born in Collinwood, Wayne County, Tennessee, on October 12, 1931, he grew up in earshot of the planer mill. Broke his arm falling off a horse when a youngster, he learned how to swing a bat cross-handed, later to excel at golf the same way, cross-handed. He joined the Air Force in his teens and served in Okinawa during the Korean War, sending photos of the painted B-29’s home to his family. He met a girl, later his wife, Syble Hunter, at the rail station while going off to war. She happened to be sending her brother off to the same conflict. They wrote during his time overseas, and fell in love as penpal wartime sweethearts. James and Syble married upon his return, and used the GI bill to graduate from the University of Tennessee in record time, working at the cheese factory to help pay some bills. Unsure whether to work for a prominent local dairy production facility in Knoxville, or go to graduate school, he embarked on his life’s profession and passion teaching college students and growing up young men and women to maturity and a healthy profession in the dairy industry. He finished his Masters at the Ohio State University and decided to make a few dollars as an instructor at Mississippi State University to pay for his growing children, Dana Keith and Pamela Dawn Martin. Realizing teaching at the college level required a PhD he returned to The Ohio State University and finished, becoming the first person from Wayne County, Tennessee to hold a doctorate degree. After taking a position with the University of Georgia, he became a nationally recognized coach of the dairy products judging team, which won national titles several years in a row in dairy product judging. The leadership at South Dakota State University recognized an enthusiastic and inspiring teacher, and brought Dr Martin to Brookings, where he continued to win the dairy judging in the U.S. with a new group of students. Gaining a reputation for finding every one of his students professions in the industry, Clemson University called on this teacher, now recognized by the National Dairy Science Association and editor of the Cultured Dairy Products Journal. His beloved alma mater, Ohio State U called on him again to become department head of the Food Science and Nutrition. This time his preeminence as a liaison with industry enabled him to raise funds for a chaired professorship at Ohio State, and he became the first professor to be honored by becoming that chaired professor at Ohio State. With his elderly parents Luther and Auda ailing back in Tennessee he returned to Mississippi State to nurse his parents and his wife’s during their senior years. In Starkville he rode his crazy cross-handed golf swing to several trophies in faculty golf competition, regularly taking time to travel to play golf with his son. Always devoted to the Lord, he took time to be Training Union director and a youth Sunday School teacher when his children were growing up. He was chairman of deacons at Milledge Avenue Baptist Church in Athens, Georgia when they built a new sanctuary. Upon his arrival in South Dakota the pastor that baptized him in Knoxville Tennessee, showed up on his doorstep asking for help in starting a Baptist Student Union at South Dakota State. He met with a banker in Brookings and convinced him that the Southern Baptist Convention could afford to pay for a new church and BSU building in Brookings. A husband and father who was committed to his family, he led by example in teaching his children to make family a part of their lives, even if it meant travelling long distances to make sure he was there for Christmas and summer vacations with his parents and extended family. He was a life-long friend and sacrificial giver who put wife and family first. He will be missed.

Dr. James H. Martin is preceded in death by his parents Auda and Luther Martin of Collinwood, Tennessee.

Visitation is scheduled for Tuesday, June 29, 2021 from 10:00-11:00 a.m. at First Baptist Church in Starkville, MS, with the funeral service immediately following. Burial will be in Memorial Garden Park in Starkville.