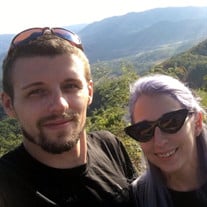 Brady Lynn Savage, age 28, of Water Valley, MS died unexpectedly Tuesday, June 29, 2021, at Baptist Memorial Hospital after a short illness. He was born October 2, 1992, in Oxford, MS to Christopher Savage and Felicia Cristole. Brady was a fun loving young man that didn‘t let life get him down. After he graduated from high school, he pursued his passion which was cooking. He took what he learned and became a chef and cooked at Locals Bar and Grill in Oxford, as well as two of the prestigious fraternities at Ole Miss. Being described as “the ultimate handy man” Brady began doing construction work. He also used those skills working on cars and other things that challenged his abilities. His hobbies revolved around Marvel Comics and their characters. His favorite being Batman. He also loved collecting miniatures, especially cooking related items, but what he enjoyed most was spending time with his wife Lauren watching movies.

Visitation is planned for Thursday, July 1, 2021, in the Gardiner Room at Seven Oaks Funeral Home from 5:00 PM until 7:00 PM. Services will immediately follow at 7:00 PM in the Henry Chapel of Seven Oaks with Bro. Jerry King officiating.