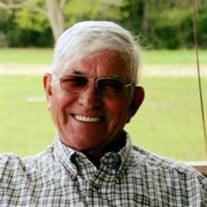 He graduated from West Point High School, married his high school sweetheart, served in the National Guard, was a Mason, and retired from Blazon Tube.

Travis was preceded in death by his parents, Grover and Ada Stewart, and siblings Don Stewart, William Clois Stewart and Patricia Stewart Renner.

He was a caring husband, daddy, granddaddy, great-granddaddy, brother and friend. He loved the outdoors, country music, a good joke or prank, trips with family, coffee with friends, and ‘piddling’ in his shop or at the pasture.

A short graveside ceremony will be held Saturday, July 3, 2021, 10:00 am at Palestine Cemetery. Calvert Funeral Home is in charge of the arrangements.

In lieu of flowers, the family requests that you hug your loved ones and donate to your favorite charity.