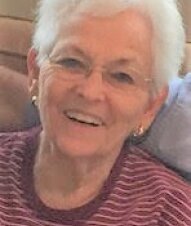 Lou Ann spent the best years of her career and retired from the MSU School of Veterinary Medicine. She enjoyed her retirement years honing her sewing and design skills as a master quilter; recently receiving the “Mississippi Outstanding Quilter of the Year” by the Mississippi Quilt Association. She was an avid member of the Golden Triangle Quilters Guild as well as the Twigs and Berries crafting group. Lou Ann proudly served on the board of her home owners’ association for years. She was a devoted wife, mother and grandmother (known as “Gran” to her grandchildren).

She loved singing in the choir as well as teaching sewing and quilting classes at St. Joseph Catholic Church. Lou Ann found pleasure in cruising and working in her green house.

Lou Ann had a strong community connection and pride for Starkville, her home of 61 years. In lieu of flowers, those wishing to make a memorial gift may do so to Starkville Strong, 109 S. Lafayette Street, Starkville, MS 39759.

A memorial Mass will be held at St. Joseph Catholic Church at 607 University Drive in Starkville at 2pm on Tuesday, July 27, followed by a reception at the church. She will be interred in the columbarium at St. Joseph.