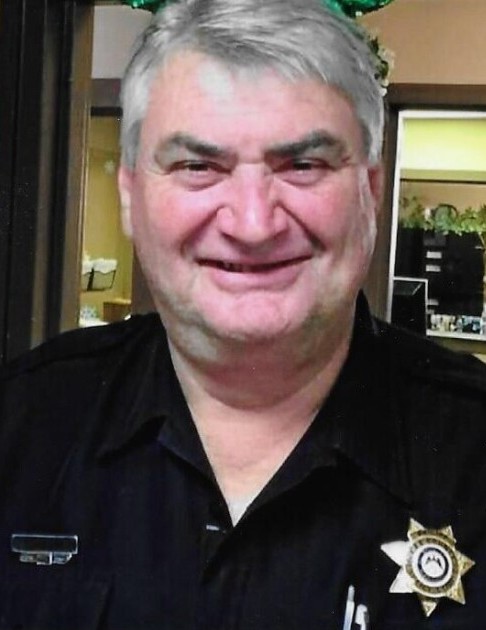 HOUSTON COMMUNITY — Russell J. “Russ” Hollis, 59, departed this life on Monday, Aug. 2, 2021 after a brief struggle with kidney failure. Russ was a big ole robust jolly soul who devoted his life to serving others in different law enforcement capacities.  Russ was born on Sept. 15, 1961 at Fort Bragg, North Carolina where his late father, SGT Major Baker Hollis, U. S. Army, Ret. and mother, Sue Bolen Moody Hollis, were stationed. He lived much of his life in the Saltillo, Guntown, Baldwyn areas except for his time spent in the U. S. Army.  Russ graduated from Saltillo High School in 1979 where he was a standout football player. He followed a family tradition of patriotism through military service and served as a helicopter prop and rotor mechanic in the U.S. Army.  After his honorable discharge, Russ chose to pursue a career in law enforcement.  His over 35 years of service included stints with the Lee County Sheriff’s Office in narcotics, Tishomingo Police Dept., Shannon Police Department, and Nettleton Police Department. He enjoyed serving small communities, getting to know the townspeople, and establishing a level of trust and confidence. Russ spent several years as Chief of Security at the North Miss. State Hospital in Tupelo and ultimately retired as a Bailiff for the Lee County Justice Court, a job he dearly loved. Russ grew up in the Birmingham Ridge Baptist Church.  He enjoyed people, great conversation, woodworking, piddling with cars, buying-selling and trading anything, making knives, politics, and most importantly, his two grandchildren who loved their PaPaw.

A service celebrating his life will be held at 2 PM Friday, Aug. 6, 2021 at the Tupelo Chapel of Holland Funeral Directors with Bro. Bobby Holland officiating.  Private burial will follow in the Rose Hill Cemetery in Houlka.  Visitation will be from 5 PM-7PM on Thursday, August 5, 2021 and from 1 PM-service time on Friday, all at Holland-Tupelo Chapel, which is honored to be serving their friends.  For those unable to attend, the service may be viewed at 2 PM Friday  at www.hollandfuneraldirectors.com/Live-streaming and will be permanently archived thereafter.

Honorary pallbearers will be Bruce Dingler, David Hill, Officer Robert Rawson, Officer Tracy Barnett and several other members of Law Enforcement who have worked closely with Russ over the years.

Russ is survived by his wife, Donna Helms Hollis of Baldwyn; his son, Trevyn Hollis (Beth Kelly) of Tupelo; his daughter, Katelyn Hollis of Baldwyn; his beloved grandchildren, Riley Grace Hollis and Lillie Goodman; his mother, Sue Bolen Hollis; his sister; Jennifer “Jen” Hollis of Sierra Vista, AZ, and brother, Baker Hollis (Linda) of Morehead, KY; his nieces and nephews, Josh, Ethan and Wesley Hollis, Brandy Babcock and Cagney Parker; and his mother-in-law, Pat Helms of Houston, MS, He was preceded in death by his father, Baker Hollis, and twin brother, Ron Hollis.