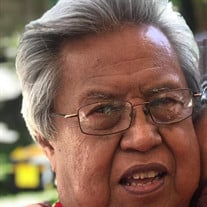 Edward Coloyan Cortez passed away Wednesday, August 4, 2021 at North Mississippi Medical Center in West Point at the age of 82. He was born in Long Beach, California.

He is survived by the love of his life, his wife of fifty years, Cynthia Cortez of Mantee; daughter, Kari Lawrence of Carthage, MS; and many nieces and nephews.

Ed moved from California to Mississippi in 1989. He was a veteran of the U. S. Army and he worked at Mississippi State University before retiring.

One of his favorite pastimes was volunteering at Hebron Christian School. He loved working at the book fair, helping out where he was needed and supporting Hebron student athletes. He rarely missed a basketball game. He even coached volleyball at one time and was affectionately known by players as “Uncle Ed”.

Calvert Funeral Home will be in charge of arrangements.