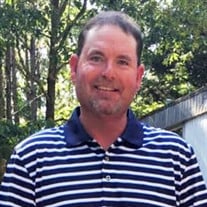 Aberdeen – Eric Joseph Yonker, 47, passed away at his residence in Aberdeen. He was born on Dec. 15, 1973, in Hawthorne, California, a son to John and Brenda (Yonker) Hutchins.

Eric grew up in California and Oklahoma and attended Madill High School where he was a proud black and gold Wildcat. From a young age, Eric was spontaneous, a dare devil, the funny guy, and the brother to many. He married the love of his life, Tida Yonker in March of 1993, and they were blessed with 26 years of marriage and three children. Eric was an intelligent man who could pick up any trade he was taught. He worked initially building manufactured homes before moving to Mississippi with his young family and father-in-law to enter the biofuels industry. Working for various biofuels companies and manufacturing plants, Eric learned many trades such as welding, carpentry, electrical, machining, etc. His final move was back to Nickoles Electric where he would work as a contractor with paper mills, etc. Eric worked on electrical systems, distributed control system wiring, and accomplished had various safety certifications through OSHA. Eric loved his family greatly and was very proud of his children and their achievements already in life. He always wanted his children to be better and do better than him. He never missed an award ceremony, athletic game, or graduation.

His wife and family meant the world to him and he loved spending time with them. Tida was the guiding light in Eric’s life. In her last eight years, he should the true meaning of “… In sickness and in health…”. He never wanted to give up hope for her miracle. A loving person, Eric was outgoing, free spirited, and charismatic. In his free time, he loved to listen to country music, do wood working, tinkering with anything. He always was innovative and knew that he would create the next new big-ticket item. Eric was a member of the US Bowling Association as well as the local Columbus Bowling League. One of his greatest accomplishments was bowling a perfect 300 game. Bowling was his way of bonding with his grandfather, Willis Rogers, wife, son, daughter, father-in-law, and countless friends. He also enjoyed fishing and playing golf.

Eric will be missed but his family believes that he is reunited with his best friend, his wife Tida. He was kind, compassionate man who loved his family dearly and they will cherish the memories of him and his perfect smile.

He was preceded in death by his loving wife, Tida Ann (Rogers) Yonker; his grandparents, Willis and LaVonna (Bonnie) Rogers, and a brother, Robert (Bob) Yonker.

A Memorial Service will be held at a later date in Oklahoma and Mississippi.