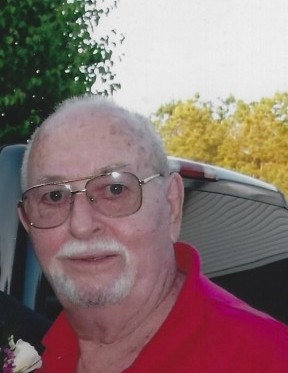 Iuka-James Alvin Marlin, 88  passed away peacefully on Friday, August 27, 2021 at his home in Iuka with family and friends surrounding him. He was the son of the late Theron Kendall and Vivian Lucas Marlin. Mr. Marlin was born on October 16, 1932 in Fawn Grove, MS. Jimmy, AKA Skillet to most that knew him, graduated from Iuka High School in 1951. He attended Itawamba Jr. College. He then decided to join the United States Army where he served his country as a Tank Commander in the Korean War. He was in the “Hell On Wheels” division. After serving his time, he moved to Tupelo where he started his business career. Jimmy became a very successful business man selling and trading cars. He co-owned the Lincoln-Mercury dealership which he later bought and managed. Years later, Jimmy moved back to Iuka where he served on many boards and committees and co-owned and operated the Marlin-Moore Chevrolet dealership. Mr. Marlin served on the A&I board for the State of Mississippi. He was Game and Fish Commissioner for 6 years. For 11 years he was on the Tombigbee Water Management Board. He worked as an investigator for the State Insurance Commissioner, was active in the Development Foundations for Tishomingo, Alcorn, Prentiss and Lee counties. Mr. Marlin served as president of the board for NASA Facilities Operations (Tri-State Commerce Park). Jimmy served on the TCEPA board for more than 15 years where he served as President. Jimmy was a Christian and a member of Harmony Hill Baptist Church in Burnsville, MS. He enjoyed hunting and fishing and was an avid nature lover. He loved to tell how he was instrumental in bringing turkey back to Tishomingo County. One of his fondest stories to tell was how he and Elvis Presley were friends. Jimmy was deeply loved and admired by his family and friends and never met a stranger. Mr. Marlin was preceded in death by his parents T.K. and Vivian Marlin, his son, Mike Marlin, a nephew Ken Moore and Willie “Black Meat” Walker, his longtime close associate.

A service celebrating his life will be held at 2 PM Tuesday, August 31, 2021 at the Tupelo Chapel of Holland Funeral Directors words delivered by longtime friend, Mitch McNeece.  Burial will follow in the Marlin family plot at Fawn Grove Cemetery in Itawamba County.  Visitation will be from 5 PM-7PM Monday at the Iuka Baptist Church, 105 Eastport St., Iuka and on Tuesday from Noon-service time at Holland Funeral Directors, 5281 Cliff Gookin Blvd, Tupelo-which are honored to be assisting their friends.

Memorials may be made to Mississippi Wildlife, Fisheries and Parks Foundation, P.O. Box 14194, Jackson, Mississippi 39236