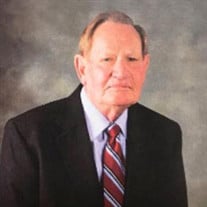 Tootsie grew up in Monroe country in a large family and was a graduate of Amory High School. He went to work at an early age and worked many jobs, some of them included a position at Tubb Printing, a car salesman for a Ford dealership, and job at a propane gas company. Despite these many jobs, his favorite lifetime career was working as a conductor for Frisco Railroad, which later became Burlington Northern. He loved his position as conductor as he traveled many the miles in the southeast as well as met many great people. He was an organized man whose work ethic helped provide a great life for his family.

He was blessed by God with a daughter, whom he cherished. He was a member of the Amory First United Methodist Church and knew the Lord as his Savior. He was unique and had a heart of gold for others. Tootsie enjoyed contributing to the church’s building fund, he was faithful in tithing, and was always eager to give hugs to those that needed a lift. His family and close friends, such as James Tate, Otis Cowan, Douglas Crook, and Larry Clark meant the world to him. In his down time, he liked to listen to old style country music and work outside. His hobby of landscaping landed him the award of yard of the month several times. Tootise just enjoyed the simple things in life, God, his creations, family and friends.

Many memories were made through the years with Tootsie and his family and friends will cherish them forever. They all have peace knowing that he is with God.

Visitation for family and friends will be held at the graveside from 10:00 am until the service hour at the cemetery in Amory.

Donations in lieu of flowers may be made to the Amory First United Methodist Church.

Memories and condolences may be shared with his family at EEPickle FuernalHome.com