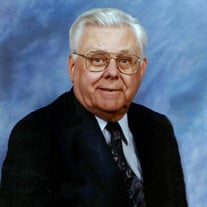 Smithville – Billie Pruett, 96, met his Savior face to face on September 12, 2021. He was born on November 17, 1924, in Monroe County, MS, to the late Will Drew Pruett and Lillie Jones Pruett.
Billie grew up in Monroe County and graduated from Wren High School. A patriot, he entered the US Army in July of 1943 and served until 1946. While in the service, he helped protect this country while he fought in WWII and the Korean War. He was a great provider for his family and worked as an auto parts manager for over 50 years. Later in life he assisted many veterans navigate the system as the VA officer for Monroe County so they could obtain the benefits they had earned.
At age 22, he married the love of his life, Jo Avonell Bailey, and they were blessed with four children, as he considered his in-laws his own, and a large extended family. Throughout his life, he lived the life of a true Christian, who let God speak through him. He served on many boards and committees in the Methodist Church and was a lay speaker at times at various churches. He was a member of Smithville United Methodist Church and taught Sunday school up until three years ago. Billie always tried to seek and listen for God’s voice.
Billie was the hero in his family and they all adored him. He kept his kids spellbound as he told many stories from his service days in the Army, as well as his childhood years, playing Wren High School football, and other escapades. Billie was compassionate, always thinking of others, and had a great sense of humor. In his free time, he liked to be with his grandchildren and great grandchildren and watch them play sports. Billie also enjoyed reading and playing cards. He was also a member of the VFW and the American Legion. Billie also served as the Election Commissioner for over 20 years.
His family has complete confidence that he is in the loving arms of God, reunited with his wife, and he is completely healed. Billie will be missed dearly yet the great legacy of love he left will live on in hearts and minds of his loved ones.

He is survived by his daughter, Sue Collums (Terry), Smithville; son, Bill Pruett (Diana), Columbus; grandchildren, Toby Collums (Kathy), Drew Pruett (Taylor), and Chad Collums (Ashley); great-grandchildren, Bailey Collums, Neily Claire Collums, Emmy Pruett, Patrick Pruett, Pruett Collums, JonAsher Collums, and Parker Collums; nephews, Ricky Goodwin (Lori), and Roger Goodwin (Kim).
In addition to his parents, he was preceded in death by his loving wife, Avonell; sisters, Ruth Pruett Goodwin, and Louise Pruett Ray.
A Celebration of Life service will be held on Thursday, September 16, 2021 at 3:00 pm at the Smithville Chapel of E. E. Pickle Funeral Home in Smithville, MS with Bro. Wes White and Bro. Drew Gardner officiating. Burial, with Military Honors, will follow in Young Memorial Gardens in Smithville with pallbearers being Toby Collums, Drew Pruett, Chad Collums, Ricky Goodwin, Roger Goodwin, Phillip Collums, Bobby Harper, and Jeff Morgan.
The family requests that in lieu of flowers that memorials will be made to St. Jude’s Children’s Research Hospital which Billie had actively supported for many years.
Memories and condolences may be shared with his family at eepicklefuneralhome.com.