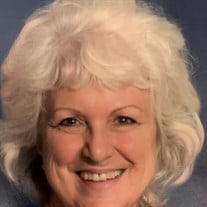 Carolyn Marie Johnston Larkins Andrews, 71, passed away peacefully in her sleep, Monday night, September 20, 2021, at her home in West Point. She was born on September 22, 1949, in Lee County, to the late Wade and Ellie Dee Clayton Johnston. She attended Nettleton High School, but graduated in Dyersburg, Tennessee. She was a retired Wal-Mart employee, having worked there for 30 years. She attended The Episcopal Church of The Incarnation in West Point where she and her husband, David, were married on June 29, 2002. She was busy with her flower gardening and her grandchildren. She had no favorites, but she loved them all dearly.

In addition to her parents, she was preceded in death by her grandparents: John and Susie Clayton and Bob and Grace Johnston, a sister: Ruth Tubbs (Charles) of Athens, and a brother: Bennie Wade Johnston of Dyersburg, Tennessee.