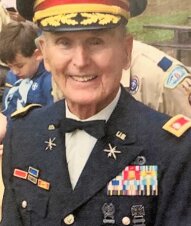 On a warm 17th of July in 1933, Paul Scott Sellars was born on the family farm in Bell School House, northwest of Starkville, MS. Parents, Paul Wilson Sellars and Sophie Mae Newburn Sellars felt blessed as he was healthy and strong. Maternal grandmother, Edna Miller Newburn had looked forward to the arrival, but died a few days earlier.

Paul Scott grew up working on the family farm. His dad got him out of bed before
4:00 A.M. every day, even while he was in school at Mississippi State University. He attended school at Starkville, graduating in 1958 from Starkville High School.

Paul Scott made his first commitment to military service in 1950 by joining the Mississippi National Guard. He was 17 and his dad reluctantly signed his paperwork. Dairy Science was his primary study at MSU, at that time, Oktibbeha County was the Dairy Center of the South. The family farm was one of the early Grade A dairies in the county. Upon graduation from MSU in 1955, he received his commission from the U.S. Army as a 2nd Lieutenant in AA Artillery. He was called to active service in early July. The legal requirements for military service at that time was two years and eight years inactive. He had planned to return to the farm after two years. Upon completion of the basic officer’s course, he was shipped out to Korea, stationed at Panmunjom where the Peace Talks were conducted; He served 16 months.
Returning stateside he was posted to For Benning, GA, while there he married the love of his life from MSU days, Mildred Nations Sellars, a Jackson girl. She took to military life like a duck to water. In early 1958, he volunteered and was sent to Germany with the famous 3rd Infantry Division, where he served three years in the Cold War on the line against USSR. In Germany, they had their first child, Paula Lynn. Returning to the U.S. in December 1960, he reported to Fort Bliss for school and a teaching assignment at the air defense school. While at Ft. Bliss, their second child was born, Perry Scott. In late 1964, it was back to Korea. Upon returning to the U.S. preparation began for going to Vietnam. 1967 and part of 1968 were spent in the Micon River, Vietnam

In the early 1970′, the family moved to the Middle East where Paul was the senior missile officer for Turkey and Greece and Millie taught in the Defense Department school while there.

After returning to the U.S., Paul was posted with the ROTC Department at Mississippi State University. In 1975, Paul retired from the U.S. Army as a LTC and afterwards took a job in the insurance business, servicing the personnel of the U.S. military. In 1983 after a bad accident, he resigned from the insurance business and gave his time to family and the local area.

He and Millie were actively involved in saving and restoring the old First Baptist Church on Lampkin Street. They also purchased and restored the Jackson/Tarry house, which was to be torn down when Cadence Bank was built on Jackson and Main street in 1975. It was one of the old homes in Starkville built for the first carpet bagger sheriff in the 1800’s. The house was moved to the family farm and restored for comfortable living.

He was preceded in death by his wife, Ida Mildred Nations.

Visitation is scheduled for Friday, October 22, 2021 from 9:00-10:00 a.m. at First United Methodist Church in Starkville, MS, with the service immediately following in the church sanctuary. Rev. Jim Genesse will conduct the service. Burial will be in Oddfellows Cemetery in Starkville.