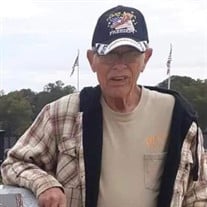 Chuck grew up in Texas and graduated from High School. He then obtained a scholarship for bull riding and he attended Sam Houston State University in Huntsville, TX. A true cowboy, he loved the challenge of riding bulls and beating the clock. One of his close friends growing up was Cecil Hargroue, they went to school together and rode bulls together. He was a patriot through and through and joined the United States Army where he served for two tours in Vietnam. He obtained the rank of Sargent and received the Purple Heart award He was proud to be an American and our country was blessed by his selfless service. After his service, he worked for the city of Bellville where he worked in the Maintenance Department until retirement.

Having been through so much in his life, he was naturally a little stubborn yet he had the biggest heart, knowing that life was short. Chuck was blessed by God with a loving wife, Debbie Runyon, and they did all sorts of things together through the years. They enjoyed gardening, playing dominoes, and fishing. One of his other buddies with whom he fished was Don Royer.

Chuck’s family said that he was a full time jokester who was a proud vet and that he always left a special mark on one’s heart after you got to know him. Chuck especially liked to spend time with little hot rod Bo. A wonderful man, Chuck believed in God and was Southern Baptist. A major supporter of Donald Trump, Chuck believed in preserving the God given freedoms that we were given in the United States. He liked to listen to Country music and just be outdoors enjoying God’s creations.

There will never be another Chuck, a true character who was a great patriot. He will be dearly missed, yet his family has peace knowing that he is in Heaven.

In addition to his parents, he was preceded in death by his wife, Deborah Dietz.

A private family service will take place at a later date.