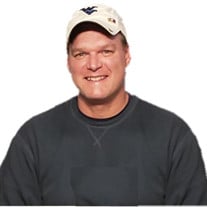 David Leslie Cooper, age 54, of Calhoun City, MS died unexpectedly Monday, December 6, 2021, In Yalobusha County. He was born October 29, 1967, in Arkansas to the late Preston and Barbara (Thomas) Cooper. After graduating from Hugh school, David Joined the United States Army where he honorably served our country during the “Desert Strom” conflict. Upon completion of his service, David attended Itawamba Community College and studied computer science. After a few smaller jobs, David went to work for Passload in Pontotoc, MS which would later become Alpine, where he worked until his passing. David had a tremendous sense of humor and always looked at things from a positive standpoint. He was also very generous and willing to help someone in need. He loved tracking down antiques and finding things to add to his collection of cast iron, and oil lamps. He will be greatly missed by all that knew him.

David was preceded in death by both of his parents.

A memorial service to celebrate his life will be held at St Christopher Catholic Church in Pontotoc, MS on Saturday, December 11, 2021 at 12:00 Noon.