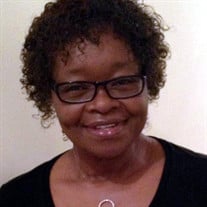 Dorothy Walton Jenkins (Dot), beloved wife and mother suddenly transitioned to her heavenly home on December 17, 2021 at the age of 63. She was born in Water Valley, MS to Cordie Mae Walton and the late Jack Walton on April 22, 1958. She was united in Holy matrimony to her dear husband Henry George Jenkins on April 8, 1984 whom she adored with all of her heart. To this union two children were born. Settling her family in Water Valley, MS, she began her employment at Big Yank, then onto Whirlpool, Parker and lastly the University of Mississippi where she enjoyed working and laughing with each and everyone of her co-workers. She confessed a hope in Christ at an early age and became born again. She was a longtime member of Chapel Hill M.B. Church where she served diligently in multiple roles. She was well known for her gentle and loving spirit, her constant beautiful smile, and her delightful sense of humor which will all be greatly missed.

The family appreciates everyone’s thoughts and prayers during this time.

Food and gifts are being accepted at the Jenkins & Walton Homes.