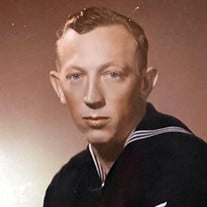 William Thomas (Tom) White, age 96, of Water Valley, MS passed from this life Saturday, December 18, 2021, at the Oxford V.A. care facility. He was born in Water Valley July 25, 1925 to the late Jesse and Myrtle (Anthony) White. In August of 1942 Tom left school early to join the United States Navy. He served in the Pacific during World War II onboard the USS Cambria as a Gunners Mate. After the war, he served in Washington D.C. where he would meet his future bride Mabel Robertson. He would end up re-enlisting two times and faithfully serve his country nearly fifteen years. Afterwards, He went to work for Remington Rand and learned the craft of working on office equipment. A trade that would follow him most of his working career. William would go on to work at the Pentagon, and in 1969 move back to Mississippi and continue his work at Rebel Press in Oxford. He would eventually retire from the City of Water Valley Water Department. He loved working with his hands, and when he found time away from work, he found joy tinkering with tractors, gardening, playing bingo and dominoes. But family was his greatest joy from his brothers and sisters to his own children. He will be greatly missed.

Visitation is planned for Wednesday, December 22, 2021, in the Gardiner Room at Seven Oaks Funeral Home from 10:00 AM until 11:00 AM. Services will follow at 11:00 AM in the Henry Chapel of Seven Oaks. Burial will be in Sylva Rena Cemetery.

As well as his parents, William was preceded in death by one brother, Charles White; and two sisters, Dorothy Shirley and Matha Antal.