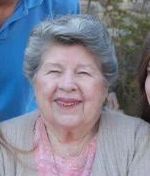 Sally Ann was born and resided in her early years in Mattoon, IL. Her family later moved to Tupelo where she met her husband, Joseph Bristow. Sally Ann and Joseph were married on June 20, 1954. They lived overseas for most of their lives while Joseph followed his career as a geologist with several oil companies. All of their children were born in Venezuela.

A graveside service will be held at 2 PM on Thursday, December 23, 2021, at Glenwood Cemetery at the corner of Green and Jackson St. in Tupelo. Visitation will be at the cemetery at 1:30 PM prior to service. Dr. Bryan Collier from The Orchard Church in Tupelo will be officiating the service. Holland Funeral Directors, Tupelo Chapel will be handling arrangements. Condolences may be emailed to hollandfuneraldirectors@comcast.net.