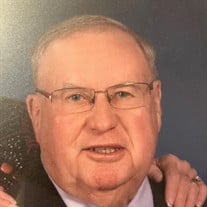 Mr. David Ray Childers, Jr., 81, passed away on January 17, 2022 at his residence in Cedar Bluff. David was born on March 30, 1940, in Tippah County, the son of the late David, Sr. and Lona Childers. David was a Salesman for Lance Snacks, Inc. for eight years. He enjoyed spending quality time with his family, especially taking his grandsons fishing. He enjoyed gardening and taking on the challenge to fix things. He took great pride in helping others. He was a loving husband, father, grandfather, great-grandfather, brother, and friend. He married Peggy Davis Childers on May 7, 1961. He was a member of First Baptist Church in West Point.

In addition to his parents, he was preceded in death by a grandson, Chase Stanford and two brothers, William and Jackie Childers.

A graveside service will be on Friday, January 21, 2022, at 1:00 P.M. from Cedar Bluff Cumberland Presbyterian Cemetery with Brother Dale Funderburg officiating. Calvert Funeral Home of West Point is honored to be entrusted with the arrangements.