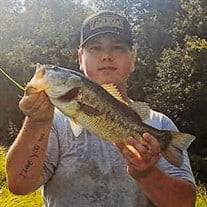 Dustin was a full time student at Nettleton High School where he was a jokester who made friends quickly. He scored the highest on the works skills test in his class and he was a smart student who enjoyed any sort of gaming or computer classes. Talented, he was in the eleventh grade and already working towards his welding certificate while in school. In addition to going to school, he was also working part time as a stocker at the Dollar Tree in Amory. He was reliable and a hard working young man.

Anyone that took time to get to know him was blessed as he could put a smile on anyone’s face quickly. Dustin was a little head strong at times yet he always loved his friends and family fiercely. He was a Baptist, believed in God, and often showed his faith by being the caring shoulder for someone to lean on in times of need. Dustin never met a stranger.

In his free time, he liked to participate in computer gaming and just be with his family or friends, especially his best friend Max Hester. They worked together, hung out together every day, and they really liked to go bass fishing. Dustin liked to listen to any sort of music but country was his favorite.
His loved ones are deeply saddened with his early departure from this earth yet they know that he is with God. The memories of him will live on in the hearts and minds of his family and friends.

A Funeral Service will be held on Friday, January 21, 2022, at 11:00 am at E. E. Pickle Funeral Home with Pastor Donald Grimes officiating. Burial will follow in New Hope Cemetery, Hatley, MS with Pallbearers being Chris Spencer, Hayden Spears, Nathan Jones, Jordan Tyra, Landon McMellon, and Jamie Johnson. Honorary Pallbearers will be Cody Taylor, Hunter Johnson, and Dalton McMellon.
Visitation for family and friends will be on Friday, January 21, 2022, from 10:00 am until the service hour.