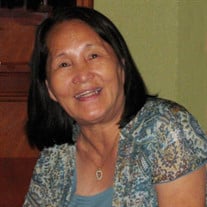 After graduating from high school, Ik Su helped take care of her 7 brothers and sisters while working at post war machining factories and a beauty salon.

Ik Su married Danny Garner on March 3, 1972. Danny was in the United States Air Force and they were stationed at Osan Air base in Osan, South Korea; England Air Force Base in Alexandria, Louisiana and again at Osan Air Base before moving to Mississippi in 1977.

Ik Su remained a housewife and mother until her death. She loved to travel, laugh and spend time with friends and her cats but mostly with her grandson that she was so proud of.

Ik Su was preceded in death by her parents, Young Ok and Sang Suk Kim; and her older brother, Duk Su Kim.

Friends are invited to meet with the family for visitation on Thursday, from 12:00 pm until the funeral hour at 2:00 pm.

Please share your memories and condolences with her family at eepicklefuneralhome.com