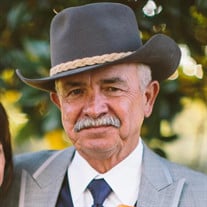 Martin (Marty) Guest Langston Jr., age 68, of Oakland, MS passed away Friday, January 21, 2022 at Baptist Memorial Hospital in Oxford, MS. He was born November 4, 1953 to the late Martin Guest (M.G.) and Ruby Langston in Charleston, MS. Marty attended Oakland School until the school closed and graduated from Coffeeville High School in 1971. He went on to further his education at Northwest Junior College and graduated from Mississippi State University in 1976. After college, Marty returned home in Oakland to help his dad with the dairy farm which later expanded to a row crop farm. He loved hunting, fishing, and anything outdoors. He was a grill master, especially known for his amazing steaks. He loved his family and loved spoiling his grandchildren. Later on, Marty became involved in the cattle industry. For decades, he was instrumental in promoting the Gelbvieh breed throughout Mississippi as well as the southwest region of the US. He was an active member of the Mississippi Cattlemen’s Association, Mississippi Gelbvieh Association, and American Gelbvieh Association.

Visitation is planned for Monday, January 24, 2022, in the Gardiner Room at Seven Oaks Funeral Home from 11:00 AM until 1:00 PM. Services will immediately follow at 1:00 PM in the Henry Chapel of Seven Oaks. Burial will be in Oakland Cemetery.

As well as his parents, Marty was preceded in death by one son, Martin (Tripp) Guest Langston, III.

In lieu of flowers, donations in Marty's memory can be made to the Ford's Well Church of Christ or the Mississippi Gelbvieh Association.