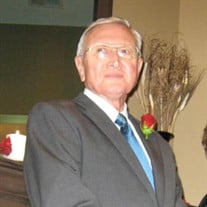 He grew up in Union County and graduated from Sherman High School. He served b6 years in the United States Army. He later attended IJC, Memphis State University where he also obtained a Bachelor of Science in Accounting. His first job ever was as a book keeper at Sun Records, which happen to be during the time that Elvis was recording at the studios. He joined Nail, Tate, and Greer Accounting Firm in Tupelo which eventually moved to Amory. He also was employed by Gilmore Puckett-Amory Cotton Oil. He served on the National Cotton Seed Council where he was on the Board of Directors and also served as President. As a distinguished memory of the Amory Rotary Club, he received the Paul Harris Fellowship Award.

Thomas was a member of First Baptist Church where he was a Sunday school teacher and church treasurer. The fellowship of his church family meant a lot to him and through the years they became real close. As a Christian, he enjoyed Bible Study, Biblical Archeology and traveled to the Middle East to experience the rich history in Christianity. Thomas was a very ethical and moral man who strived for perfection, was energetic, productive, and served his community well. He was blessed during his lifetime with two children and two wives. His first wife was Clara Britt, with whom he had two children, and he took great care of her when she became ill. His second wife was Paulette Watson Greer, with whom he enjoyed traveling to many places and just spending time together.

In his free time, he liked to fix anything and work with his hands. Being outdoors was something he enjoyed greatly, and he grew a great vegetable garden and kept his yard perfect. He also liked to dabble in photography, taking many great photo through the years as he traveled. Some of the places he traveled to include Europe, all over the US, the Caribbean, and South America. He also liked to watch football and baseball on TV and in person.

A loving and caring husband, father, and caregiver, Thomas was a generous soul, with a sweet smile, who always put others before himself. He will be missed greatly by his family and friends yet they know that someday they will be reunited with him.

In addition to his parents, Thomas was preceded in death by the mother of his children, Clara Britt Greer and a very special grandson, Andrew Thomas Fox.

Donations in lieu of flowers may be made to the Juvenile Diabetes Research Foundation (JDRF), 2630 Southerland Street, Jackson, MS 39216.