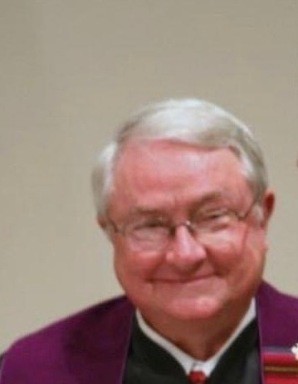 Reverend Raiford Payne Wallace, Jr., 84,  a great United Methodist preacher, servant and Child of God, entered the Church Triumphant from his home near Guntown in the early morning hours of Friday, January 28, 2022.  Born in Independence, Tate Co., Miss. on July 14, 1937 to the late Raiford P. Wallace, Sr. and Mary Ellen Burford Wallace, he grew up in this quaint southern community and graduated from Independence High School.   Ray, having answered the call to be a Methodist preacher, first received his BS Degree from the University of Mississippi attended Candler School of Theology at Emory University in Atlanta receiving his MA in Theology.  Raiford married the former Gatha Ruth Ferguson on June 17, l955 in Hernando, a ministerial and marriage partnership that spanned almost 67 years. The family served Churches all over the North Mississippi Conference of the United Methodist Church from 1955-2014, including 9 years as District Superintendent of the Starkville District, a responsibility of over 152 Church that he dearly treasured.  He also served in the in the State of Washington Conference. Raiford was devoted to the parishioners he served for over 60 years and had the innate ability to provide deep spiritual leadership bringing many souls to the Lord.  He was particularly proud of the work he did with the Wesley Foundations at MSU and Ole Miss and the special ministry he had with the First United Methodist Church of Moscow, Russia. In early days, he enjoyed fishing, loved God’s creation all his life especially gardening and bird watching and singing from the old Cokesbury Hymnal.   Interestingly, Raiford’s forebears, the Brooks family, were some of the original founders of Methodism in America.

Due to the Covid pandemic, the family has chosen to have a private family only service on Sunday at Holland Funeral Directors-Tupelo Chapel.  Rev. Andy Ray will officiate and friends and fellow clergy are urged to view the service at www.hollandfuneraldirectors.com/Livestreaming at 3 PM Sunday. A private family burial will take place at Pleasant Valley United Methodist Church in the Blair Community.

Rev. Wallace is survived by his wife, Gatha of Guntown; his daughters, Janna Fairley (Buddy) of Saltillo and Judy Murphy (Dennis) of Guntown; a son, Joe Wallace (Kelly) of Tupelo; One of his special joys were his 9 grandchildren and 16 great grandchildren.  He is also survived by his siblings, Joan Walker, Frances Ewing and Jimmy Wallace; several nieces and nephews and a host of friends all over the Mid-south.

Pallbearers will be grandson’s and great grandsons, Patrick, Matt, Chris, Josh, Tim and Thomas.  Honorary pallbearers will be Paul Turner, Kytan Reese and past and present ministers in the United Methodist Church.