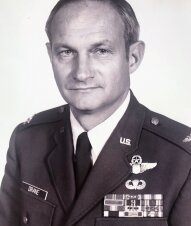 Colonel Leslie Robinson (Bobby) Drane, Jr. Our beloved husband, father and friend to many passed away on January 11, 2022 after a prolonged illness. A true Southern gentleman, American Hero, and most importantly a dedicated and caring husband, father and grandfather.

Born April 1, 1936 in Mayhew, Mississippi, Leslie graduated from Starkville High School in 1954 as Salutatorian where he excelled in many sports including football, basketball, and baseball. Leslie graduated from Mississippi State (forever a Bulldog fan) where he earned a Chemical Engineering degree while also serving as ROTC Air Force Cadet Colonel and President of Kappa Sigma Fraternity. While serving in the US Air Force as part of his ROTC commitment, he began flying planes and never looked back. He dedicated himself to his country and served in the USAF for 28 years achieving the rank of Colonel. He has received numerous awards and recognitions, most notably the distinguished Flying Cross, the Bronze Star Medal, the Air Medal with 16 oak leaf clusters, the Meritorious Service Medal with one oak leaf cluster, and the Air Force Commendation Medal. He received his MBA from Auburn University and is a distinguished graduate of the Air Command and Staff College and Air War College. Leslie flew 260 F-100 combat missions in Vietnam. He piloted numerous fighter jets ultimately concluding with the F-4. Leslie was a true patriot and had a deep love for America and the flag that represents it.

Leslie was known to “run” the farm at an early age, driving a tractor by the age of 10. He successfully juggled school, sports and farm-life and always had a driven spirit. Leslie was the second oldest of four children and being a natural born leader counseled many throughout his years. Serious yet compassionate, Leslie was generous and always willing to help someone in need. Leslie’s happiest moments in life were with his family. He was the most loyal fan of his children and grandchildren as he attended sports games and practices, dance recitals, music performances, speeches, and plays. As official chauffer, tutor, mentor, and playmate Leslie “Dada/GiDad” was dearly loved by his grandchildren.

Services will be held at the Church of Jesus Christ of Latter-Day Saints in Marietta, Georgia on January 28th at 10:00am followed by a graveside service on January 29th at the Mayhew Cemetary at 2:00pm.

In lieu of flowers, donations may be made to the Mayhew Cemetery % Bess Swendenburg, PO Box 13, Mayhew, MS 39753-0013 or a charity of your choice in his honor.