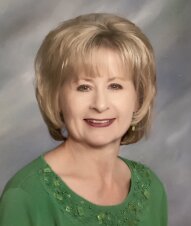 Lynn Grier Johnson passed away on January 29, 2022 at the age of 74, after a lengthy battle with Alzheimer’s.

Born on September 13, 1947 in Corinth, Ms, to Sidney F Grier Jr. and Doris Grier, Lynn grew up in Columbus, Ms. She graduated from S.D. Lee High School in 1965 and remained in close contact with her fellow class members up until her illness. She worked many years in the banking industry, retiring as First Vice President of Trustmark Bank in Columbus. Following retirement, she moved to Starkville. Unable to sit still in retirement, she went on to work at Bethany Christian Services and later the Starkville school system.

Lynn was a charter member of Crosspoint Church in Starkville, Ms. She enjoyed Mississippi State Sports, tailgating, travel, and spending time with grandchildren and doing all those things with her loving husband and best friend, Myron.

Those are great accomplishments but she will mostly be remembered by the bright light she cast on everyone around her. To know her was to love her. She made you smile when she walked in a room, and you better be prepared, because she was coming to give you a hug that reached right to your heart. She was an encourager. She was always sending notes and cards to family and friends for birthdays, anniversaries, holidays or just because. Her laugh was contagious and one of the little things we’ll miss the most. The word “Joy” always comes to mind when we think of Lynn, Mom, Mama, or Ran. That’s because the love of Jesus was overflowing out of her and onto us. Even in her illness, we saw sparks of that joy. Our world is a little dimmer without her.

Lynn is preceded in death by her father, Sidney F Grier Jr., and her mother, Doris Grier. She is survived by her husband of 36 years, Myron of Starkville and their children, Chris Norwood (Suzy) of Oxford, Ms, Hank Norwood (Christie) of Caledonia, Ms and daughter Gayla Norwood Davis (Mac) of Kingwood, Tx. She is also survived by her grandchildren, Alex Wood (Erica) of Phoenix, Az. Holland Davis of Kingwood, Tx. Grey Davis of Spring, Tx. Parker Norwood of Caledonia, Ms. She is also survived by 4 sibling; ,Sidney F Grier III of Arlington, Tx, Gay McCrary (Jay) of Columbus, Ms, Ken Grier (Veronica) of Pontotoc, Ms and Karl Grier of Pace, Fl and numerous nieces and nephews.

The family would like to extend their heartfelt gratitude for the wonderful care Lynn received from the staff at the Bedford and Windsor Place.

Lynn’s absolute favorite color was blue, and the family is wearing blue in her honor.

Visitation will be held on Tuesday, Feburary 1, from 12:00 to 2:00 at Welch Funeral Home, Starkville, Ms. The service will follow immediately. The service will be officiated by Brother Scott Cappleman. Pallbearers are Grey Davis Parker Norwood, Lu McCrary, Andy Andrews, Mac Lowery, Brent Parker, and Michael Garletts.
,
Additionally, if you would like to make a contribution in memory of Lynn, the family suggests the Alzheimer’s Association at Alz.org or Crosspoint Church Buiding Fund, 903 Stark Rd, Starkville, Ms 39759. Flowers can be sent to Welch Funeral Home, Starkville. Ms.