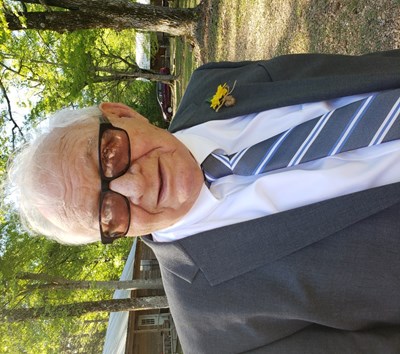 William “Bill” Dyke White, Husband, Father, G Daddy, Brother, Uncle, Friend, Gideon, Mason and Shriner departed his Earthly life quietly in his sleep in his Prentiss County Home of forty-seven years.
Bill was born April 15, 1938 to John Sharpe White and Loche Ferrell White. He was the first born and only son of three children.
He attended the University of Mississippi (Ole Miss) where he met the love of his life, Martha Sansom. They were married May 12, 1962. They were blessed with two children, John Russell “Rusty” and Kristy. They were happily married and for 58 years until God took Martha home.
He worked hard. He was Vice President of Prentiss Manufacturing. He also sold real estate and insurance. If you ever met him, you know that he had been to Memphis once and he met Elvis! He was an AVID Ole Miss fan. He loved to tell stories and even published a book of poems. His favorite place in the whole wide world was Toccopola. He was a very special man and he’d give you his last dime if you needed it!
He is survived by his children, John Russell White (Elizabeth) of Iuka, Kristy Moore Gibson of Starkville but has been in Booneville with him. Two sisters, Nancy Sue White and Mary Temple White both of Pontotoc and two sister-in-laws, Shirley Mize and Amye (Clyde) Fugate. He is survived by seven grandchildren: Andrew (Susie) White of Germany, Kathryn (Matthew) Jordan of Eupora, Kimberly Barker of Oxford, Jonathon (Laiken) Moore of Brandon, Alexander White of Oxford, Spencer White and Henry White both of Iuka. Four great grandchildren, Ryan and Mason White of Germany and Bryson and Olivia Barker of Oxford, and two more on the way. Two nephews, Leland (Amanda) Mize and their children, Ethan and Ashton, and Lance (Ary) Mize and their children, Arly and Parker and one niece, Rachel (Jason) Nanney of Jackson, TN. He is also survived by a favorite “daughter” Anna Yamada who was their foreign exchange student forty years ago and his very special caretaker, Amanda Acosta and her children, Luis and Destini and many loving friends.
Due the current health concerns, a private family service will be held Sunday, February 6, 2022 at Carolina United Methodist Church. In lieu of flowers, the family requests donations be sent to Carolina United Methodist Church (2000 9th Street Booneville, MS 38829), the Shriner’s Hospital, the Gideon’s or St. Jude.