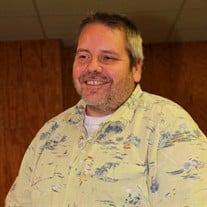 Aberdeen – Houston “Hue” Owen, 56, passed away on February 1, 2022, at North Mississippi Medical Center, and he began his new life in Heaven. He was born on February 7, 1965, in Monroe County, to Mary Cowart Strawbridge and the late Johnny E. Owen.

Hue grew up in Monroe County in a large family with six other siblings and graduated from Aberdeen High School. He then went back to school at Itawamba Community College where he received two Associates Degrees, one in Computer Science and the other in Business Administration. Hue was employed at Flexable Flyer manufacturing in West Point, MS, for over 18 years. A man with a great work ethic, he was a Supervisor in the paint department there and really enjoyed it. After he left employment there, he worked at Toyota in Baldwyn where he was a Robotic Operator.

He loved the Lord and was a Non-Denominational Christian who was unselfish and caring. Hue was always the light to others, made others smile, and at one point during his life, he became an ordained minister. The Christmas Shoebox Ministry, Samaritan’s Purse was something he always contributed to every year. He walked his faith out daily, and loved his family dearly. At times, his humor was a little dry yet when you got to know him, you loved him. He was passionate about his family and could be a little outspoken at times, always meaning well.

In his free time, he liked to go camping, be outdoors doing different things like hiking, especially on the Appalachian Trail, or working in his vegetable garden. He was a member of the Sons of American Legion as well as a Certified Member of Star Fleet Federation. He liked 80’s music, especially The Police and working on puzzles. Houston was real close to his immediate family and his cousins, especially Drew Owens. Every now and then he would travel to South Carolina to catch up with family and reminisce about old times. He was also an avid writer and journalist and has a book that will be published soon.

Although his presence will be dearly missed, his family and friends have confidence that he is in the presence of The Almighty God, surrounded in light and love.

Left behind to treasure his memories are his mother, Mary Strawbridge, Amory; sisters, Becky Ray, Pontotoc, Frances Roberts (Monty), Amory; brothers, Mike Owen (Ginger), Amory, Steve Strawbridge (Leighanne), Amory, Julian Lee Strawbridge, Amory, and David Nelson (Julie), Utah; a host of nieces and nephews; and lastly but not least, he had a special place in his heart for the original or as the family call it, the “OG5”, Shanna Boydtun, Dianna Kilgore, David Wise (April), Hattie Smith (Nathan), and Ben Owen.

A Memorial Service will be planned at a later date and will be announced once it is final.