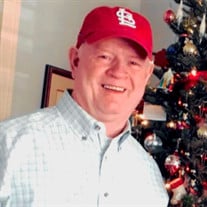 Amory – Johnny Butler “J.B.” Stevenson finished his earthly course and began his new life in Heaven on Saturday, February 19, 2022. He was born on November 16, 1949, in New Albany, MS, to the late James Robert Stevenson and Ruth Butler Stevenson.

J.B. grew up in Monroe County, with two brothers, and graduated from Amory High School with the Class of 1968. He did attend some college but quickly began his career, providing for his family. J.B. initially worked as a Salesman at Jones Motor Company on Main Street in Amory. He then dedicated the rest of his career working for forty three years at Bowman Distributions where he sold Industrial Hardware. In addition to being a dedicated worker, he was a Patriot through and through. He served this great country in the MS Army National Guard in the 223D Engineering Battalion. J.B. obtained the rank of Sergeant E-5 and was an excellent marksman.

J.B. married his bride, Cathy Sanders, on October 5, 1973, and they were blessed with 47 years of marriage. God gave him two children and four grandchildren. His family meant the world to him and he always put others before himself. J.B. was a member of First Baptist Church in Amory and he loved the Lord.

He was a funny, animated man with a great sense of humor. He couldn’t talk without moving his hands and some of his best talking was done through his base guitar. J.B. was a talented artist, musician and singer. For many years, he was an original member of the local favorite band, The Gents, which played classic rock, from the 60’s and 70’s. He and his fellow band members made some great memories through the years and they played for just about everyone in Monroe County at one point or another. As much time as they spent together, with many ups and downs, they considered each other extended family.

In his free time, he enjoyed anything outside as he was athletic and competitive. He loved to play golf, go hunting and fishing, work in his shop, and looking for treasures with his metal detector. J.B. was a member of the Big O Hunting Club where he was nominated the Best Dressed Hunter and he proudly lived up to his title. He had so many friends through golf and hunting, with a couple of his very closest friends being Mike Ausbon and Tommy Cole.

J.B. made a lot of people in the community laugh, smile, and dance through the years. The joy of music he shared with us fails in comparison to the great love he shared with those so close to him. He will be dearly missed.

In addition to his parents, he was preceded in death by his brother, Bobby Stevenson.

A Private Family Graveside Services will be held on Friday, February 25, 2022, with burial in Masonic Cemetery, Amory, MS. Honorary pallbearers will be The Gents band members, his golf buddies, and The Big O Hunting Club members.

Visitation for friends and family will be on Friday, February 25, 2022, from 10:00 am until 12:00 pm at the funeral home in Amory. As Covid is still causing devastation for so many families, it has been asked, to protect those who are vulnerable, that masks are to worn for the visitation.

Donations in lieu of flowers may be made to the charity of one’s choice.