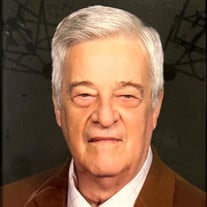 Robert Foster (Bob) Gates (84) of New Albany passed away peacefully on February 19, 2022, in Nashville Tennessee surrounded by members of his family. He will be greatly missed by all who knew him.
A longtime resident of New Albany, Bob was born in West Point, Mississippi on November 21, 1937. He graduated from Mississippi State University with an engineering degree, and for many years worked as an engineer and a manager in the furniture industry. He also owned, along with his wife Pat a landscaping business and florist in New Albany.
A loyal friend to many and loved by all, Bob loved God, his family, and Mississippi State University, in that order. For many years, he was a fixture at First United Methodist Church in New Albany, Mississippi, teaching Sunday School classes until his health prevented his Christian leadership.
Bob was preceded in death by his loving wife, Pat, and his parents Robert and Thelma Gates. Surviving Bob is his sister, Janice Kirk (Herbie) of Bentonia, Mississippi, three daughters: Debbie Smith (Mike) of Sandy, Utah, Susan Griffin (Don) of Nashville, Tennessee, and Amy Carroll (Ray) of Germantown, Tennessee, and eight grandchildren, Haley, Josh, and Rob (Debbie), Connor, Carly, and Annie (Susan), and Hayden and Hannah (Amy).
Pall Bearers will be his grandsons and sons-in-law. The Hugh Clayton Sunday School Class is invited to serve as honorary pallbearers.