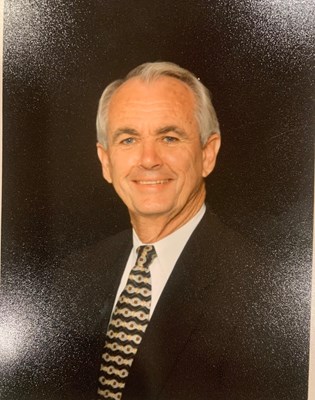 Bill was born to Lavurt and Louise Wardlaw on August 28, 1939. He is survived by his loving wife of 61 years, Phyllis Crane Wardlaw. He is “Dad” to four children: Bill Wardlaw, Mark Wardlaw, Karen Wardlaw Kemp, Brad Wardlaw; and “Pocca Bill” to seven grandchildren, and two great grandchildren.

Bill was a retired 20-year veteran of the U.S. Navy where he served as an Air Traffic Controller. After retiring from the Navy, he served as Director of the Pontotoc County Chamber of Commerce, then as the Pontotoc County Veterans Service Officer. Bill was a Rotarian, and honored to be named a Paul Harris Fellow. One of the greatest joys of his life was serving as the Minister of Music (either full-time or interim) for several local churches and at every church of which they were members during his Naval service.

In lieu of flowers, memorials may be given to St. Jude Research Hospital or the First Baptist Church Building Fund.

The service can be viewed on the local tv channel 99 or live streamed at fbcpontotoc.org.