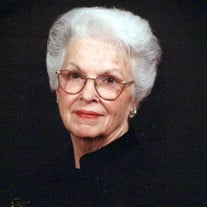 Alice Virginia White Stogner, age 95, of Olive Branch, MS passed from this life Monday, February, 21 2022, at Baptist Memorial Hospital Desoto after an extended Illness. A lifelong resident of North Mississippi, she was born December 17, 1926, in Water Valley, MS to the late Carl and Thrace (Cooper) White. She was a very kind and quiet woman who was reared during a difficult time in our nation’s history. She didn't shy away from work, and after graduating from Water Valley High School in 1944, learned about clerical work. In 1950, she married the love of her life, Kenneth Stogner in Crenshaw, MS with Rev. Guy Reedy officiating. After starting her family, she helped provide for them by applying her clerical knowledge as a secretary in the banking industry, wholesale grocery, and even for the Civil Air Patrol. When she found any available time, she was known to do needlework and enjoyed working with plants and flowers. Alice was also an active member of Gracewood Baptist Church in Southaven. MS.

Visitation is planned for Friday, February 25, 2022, in the Gardiner Room at Seven Oaks Funeral Home from 1:00 PM until 2:00 PM. A private family service will immediately follow at 2:00 PM in the Henry Chapel of Seven Oaks with Bro. Barry Baker officiating. Burial will be in Oak Hill Cemetery.

As well as her parents, Alice was preceded in death by her husband, Kenneth L. Stogner; one son, Carl White Stogner, and her brother, C. W. (Bill) White.