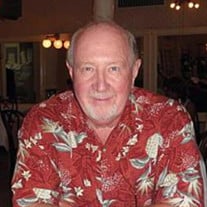 Nettleton – James “Jim” Davis Marsh, Jr., 77, passed away at his residence in Nettleton and was reunited with his son in Heaven on Tuesday, February 22, 2022. He was born on July 30, 1944, in Greenwood, MS, to the late James Davis Marsh Sr., and Ella Mae Williams Marsh.

Jim graduated from Tech High School, Memphis, TN and obtained his Associates Degree in Orthotics and Prosthetics from Shelby State University. He started his career in Sales and later became a Prosthetist, outfitting and helping many people through the years. Jim found great reward in his job, as daily he could install hope in people who thought they would never walk again or be able to do certain physical functions. He was recognized through the years in multiple newspapers for his contributions to others lives as they were able to conquer great obstacles and get their lives back again by recovering from a serious injury.

One could say that his willingness to help others guided his life. There is no doubt that his faith in Christ enabled him to stay the course while he put others first. He was a member of the Nettleton Presbyterian Church where he was active and taught Sunday School. One time, Jim while passing over a bridge, saw a man who about to take him life by jumping. Jim stopped his car, jumped out and grabbed the man to help him keep from making such a tragic mistake. He helped others whenever he could and often times others would knock on his door when they needed assistance as they knew he was a good man and was always willing to help. He donated money to numerous charities but most of all, he liked to serve others.

He married the love of his life, Marian L. Murray, on April 22, 2000, and they were blessed with many happy years together. Jim was blessed during his lifetime with a daughter and four sons. Family meant the world to him, with his cousins, Joey and Terry being some of his closest friends, they had a nickname of the Three Musketeers. Another close friend of his was Mike Gowdy, they spent decades together making wonderful memories. In his free time, he liked to garden, listening and dancing to BOP music, and doing wood work and other hobbies like building things. A giver, he really enjoyed growing fruits and vegetables and handing out his harvest to others to enjoy.

So many lives were changed because of Jim’s work. He will be dearly missed yet his family and friends know that he is in a much better place, in the presence of his Savior.

In addition to his parents, he was preceded in death by his son, James Davis Marsh, and his brother, Michael Marsh.

Visitation for family and friends will be on Monday, FEbruary 28, 2022, from 10:00 am until the service hour at 11:00 am.
Donations may be made to the Nettleton Presbyterian Church, Mullen Avenue, Nettleton, MS 38858.