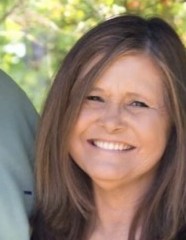 Betty McLaughlin Presley, departed this life on March 1, 2022 from Sanctuary Hospice House.  Betty was born on August 6, 1956 in Memphis Tennessee as Betty Lou Bright.  She moved to Pontotoc, Mississippi with her husband’s family after marrying at the age of 16, where she would live and raise three children for almost thirty years.  While living in Pontotoc, Betty worked a variety of jobs, including the shirt factory in Ecru, Klassic Furniture and Action Lane Industries.  Betty was an accomplished seamstress, making many of her daughters’ best dresses for church and pageants and even their wedding dresses. Betty spent a wonderful year 2000-2001 during which time her primary occupation was caring for her first grandchild while his parents were working. Betty used that time to also go back to school and obtain her Associates Degree from ICC in Information Technologies.  After obtaining her Associates Degree, Betty began a career at Swift Transportation in New Albany, MS, and later transferred to the Memphis, Tennessee office which led her back to her native hometown.  Betty married Ronald Presley (originally of Birmingham, AL), a co-worker at Swift in 2004, and they resided in Memphis until 2019, when they achieved Betty’s lifelong dream of retiring to the beach when they purchased a condominium in Gulf Shores, Alabama and relocated there to spend the rest of their days.

After two blessed years living her dream of living at the beach, Betty succumbed to a brief terminal illness.

Betty is survived by her husband, Ronald Presley, of Gulf Shores, AL, three children, Melissa McLaughlin Harrison (Jason) of Tupelo, MS, Marty “Lynn” McLaughlin, Jr. of Pontotoc, and Penny McLaughlin Logan (Will) of Pontotoc.  Betty’s pride and joy was her five grandchildren, Kellen Harrison, (Wellesley, MA), Erin Harrison (Manhattan, NY), Kara Morrisson, John Thomas McLaughlin, and Kallie Logan,  all of Pontotoc, and they adored her in return with all their hearts.

Betty is preceded in death by her parents, William Bright (Joyce) of Eupora, MS and Evelyn Bright Rodenbach of Birmingham, AL, along with her maternal grandparents who raised her from childhood, who she called “Mama,”  Velma “Dell” Burks Gravette   and “Poppy” Walter “Henry” Burks  both of  Memphis, Tennessee and Cullman, Alabama.

Services celebrating her life will be at 1 PM Saturday March 12, 2022 from the Sadie Holland Memorial Chapel at Holland Funeral Directors-Tupelo. The family will receive friends from Noon-service time and after the service at the funeral home. Reverend Ryan Moorman of West Heights Baptist Church Pontotoc, MS will be officiating.  Burial will take place at the Alabama Veterans Memorial Garden in Spanish Fort at a future date.  For those unable to attend, the service may be viewed at www.hollandfuneraldirectors.com/Livestreaming at 1 PM Saturday and will be archived thereafter.  Memorials may be made to St. Jude Children’s Research Hospital, 262 Danny Thomas Way, Memphis, TN,  38105