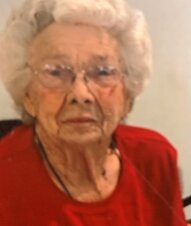 Ruth Willis passed away April 6 at the age of 94. She was born in West Point on October 24, 1927. Her parents were Robert L and Mabel Millsaps.

Ruth worked at the Army ROTC Department at MS State retiring after thirty years. She then worked for the MS State Development Foundation before becoming Housemom to Sigma Phi Epsilon. She was a member of the Eastern Star for over 50 years. After retiring her greatest joy was spending time with her family and friends, and traveling.

She was preceded in death by her husband Marvin Willis and her son Larry Willis.

The family wishes to express appreciation to the staff at The Claiborne and to Ashley Legacy for their loving care.

Memorial donations may be made to: The Cross of Christ for Starkville at https://starkvillecross.org, P. O. Box 2123, Starkville, MS 39760.