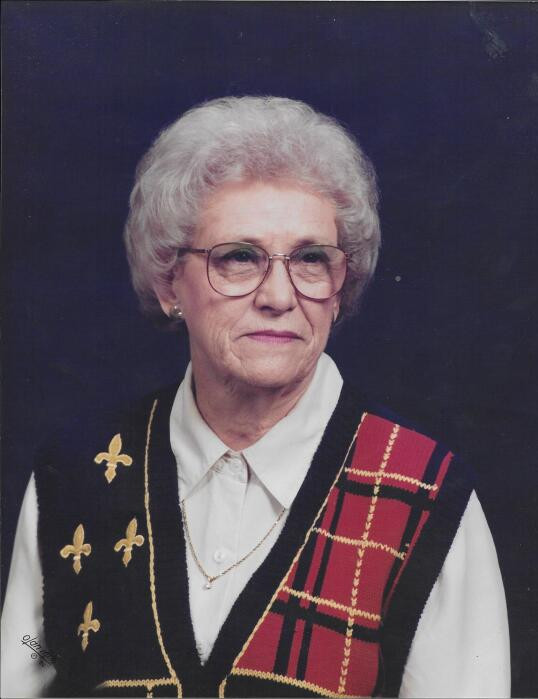 Annie Lou Summers Roebuck lived a long, colorful, independent life for 96 years.  She departed this life on Saturday afternoon, April 30, 2022 from Pontotoc Health and Rehab where she had resided the last couple years.  Born on January 1, 1926 in Mantachie, the only daughter of Walter Summers and Ivy Louise Murphy Summers , Annie Lou grew up in the Fawn Grove Community of Itawamba County and attended Mantachie High School where she excelled as a basketball star.   She worked first for Reed’s Garment Company where she met her husband, Willie Mid “Bill” Roebuck after his service in the U. S. Navy in World War II. They married on April 1, 1950, a marriage of 54 years until his death in Feb., 2004.  A hard worker, she later spent almost 35 years working for Rockwell International/Delta Tools retiring as a Production Supervisor.  She and Bill lived on their farm near the Furrs Community of Pontotoc County where they enjoyed the country life raising cattle and big gardens to feed the family. Annie Lou loved Mississippi State University sports passionately especially baseball, basketball and football.  Ever an optimistic bulldog, she purchased two season tickets to all home games for over 25 years (“one for me and one for whoever wants to go with me”, as she explained).  She was a member of Furrs Baptist Church.

A service celebrating her life will be held at 2 PM Monday, May 2, 2022 from the Sadie Holland Memorial Chapel at Holland Funeral Directors, Tupelo with her great nephew, Steve Holland speaking.  Private burial will follow at Lee Memorial Park.  Visitation will be from Noon-service time on Monday only at the funeral home.

Memorials may be made to the Second Chance Animal Rescue , P. O. Box 165, Pontotoc, MS. 38863 or to St. Jude Children’s Research Hospital, 501 St. Jude Place, Memphis, Tn.  For those unable to attend, the service may be viewed at www.hollandfuneraldirectors.com/Livestreaming at 2 PM Monday and will be archived thereafter.   Holland Funeral Directors is honored to be serving their family.