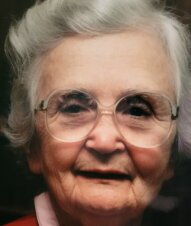 She graduated from Philadelphia College of Pharmacy and Science (now University of the Sciences) in 1941 with a BS in Biology. She graduated from Washington State University in 1947 with an MS in Horticulture. She was employed at Starkville High School for 35 years, teaching Biology. Instructing young people in the wonders of science was her passion. She won the Presidential Award for Excellence in Science and Math teaching in 1985, Member of the Starkville Area Education Hall of Fame 1988, and inducted in the Mississippi Hall of Master Teachers in 1993. After retiring as a teacher, she then worked for 13 years part time running the copy machine in the main office. She officially retired in 2008 at the age of 90. As she wanted to go on teaching after she died, she donated her body to the University of MS Medical Center in Jackson, MS. She also enjoyed singing in the choir of the First Presbyterian Church of Starkville for many, many years.

Donations in her honor can be made to the MS Food Network, a MS branch of Feeding America. A celebration of life will be held later this summer.