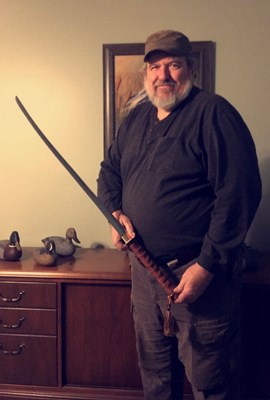 Richey Gene Crew, passed away on Tuesday, May 31, 2022 at the Sanctuary Hospice House in Tupelo, MS.

Per Richey’s wishes, there will be a graveside service at the Crew Family Cemetery, in Algoma, MS, followed by a celebration of life picnic for ALL who would like to attend, Saturday, June 4, 2022 at 4 PM. The Crew Family cemetery is located at 2854 Macedonia Road, Pontotoc, MS 38863.

He was 62 years old. He was born on August 26, 1959 to Richard Lamar (Dickie) and Shelia Simmons Crew. Richey has been known for over 40 years as the owner and gunsmith at Richey’s Gun Shop in Algoma, MS. He is also known nationwide for his custom forged knives. He was also a contestant on the History Channel’s “Forged In Fire”, season 6, episode 8, in April of 2019. Richey was a member of The Alabama Forge Council and the Southern Ohio Forge and Anvil Council. But more importantly, he was known for his love of Christ, and he tried to live his life, pleasing to God. He never hesitated to share his love for his Savior with others. For all his talents that he could do with his hands, they meant nothing compared to the love he had for his family. They were his life.

He was preceded in death by his father, Richard L. (Dickie) Crew, a grandson, Kolton Houpt; and his grandparents, Leroy and Adelle Simmons and Eugene Crew and Robbie Crew Williams.

Since the service will be graveside only, in lieu of flowers, the family request that you make donations to Sanctuary Hospice House, 5159 W. Main Street, Tupelo, MS 38803 or to the charity of the donor’s choice.

Online condolences may be offered at www.browningpontotoc.com.