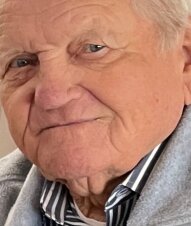 Slick was born on April 20, 1930 in Sturgis, MS. He was the son of James Corbett Jackson and Lula Ferguson Jackson. Slick was a devoted follower of Christ, an avid fisherman, a talented craftsman, loving family man, and active member in his church and community.

Slick married his first love, Martha Quilla Oswalt Jackson in 1958. Slick and Quilla were married for fifty-four years. They were lifelong companions and Slick devoted his life to caring and providing for Quilla. They were blessed with three children: an infant daughter and two sons, Lance and Joby.

In May of 1949, Slick enlisted in the United States Air Force, serving as a Radio Operator. He served in the Korean War. He loved his country and what an honor it was to serve her well. In 1952 he was honorably discharged. After leaving the Air Force, he owned and operated a feed mill, co-owned Jackson and Gillis Sodding, and co-owned Jackson Flowers and Gifts. He was a devoted member to his church family. Slick served as a deacon for many years and thoroughly enjoyed worshiping in the choir. From time to time he would even get behind the pulpit and deliver a message to his fellow brothers and sisters. Along with singing in the choir at church, he frequently spent time at the Opry House in Longview, MS singing with friends and family. During his free time, he was a fisherman, a craftsman, and an aspiring author. Slick spent many mornings and afternoons on the water. He loved putting his hands to work, creating miniature house models and boxes. In 2020, Slick published his first book and was in the works of publishing a second. He spent many mornings at his local cafe amongst his “coffee shop” buds. Along with his fellow coffee guys, he spent every day with his second love, Ms. Sally Jackson. He also enjoyed time with his family, which often involved many laughs and telling of stories from the past.

He is preceded in death by his parents, Lula and James; his loving wife, Quilla; his infant daughter; his four sisters, Q.B., Toad, Dulcia, Faye and two brothers, Lester and Hurket.

Slick will be remembered for many things, especially the love for his Savior, his infectious laugh, contagious smile, engaging stories, and kind spirit.

Visitation will be held from 12:00-2:00 p.m. on Saturday, June 11, 2022 at Sturgis Baptist Church in Sturgis, MS, with the funeral immediately following in the church sanctuary. Burial will be in Sturgis Cemetery.