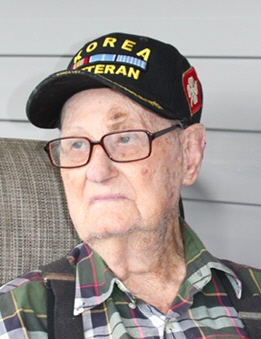 Baldwyn- Francis Monroe Lindsey, 94, husband to Billie Frances Lindsey, passed away on June 12, 2022. Born in Baldwyn, Mississippi, he was the son of the late Jube and Carrie Lindsey. He was preceded in death by 7 siblings, Alton, Relmon, Flavis, Jake, Maxine, Mary Nell, and Elton Ray; and two daughter-in-laws, Lynette Lindsey and Tami Lindsey.

Francis was an Army Veteran, serving on the frontline during the Korean War in 1950-1952. He was assigned to the K Company 9th Infantry Regiment. He received an honorable discharge in 1952 receiving a CIB Korean Service Medal, 2 Service Stars and a UN Service Medal. Francis would tell his grandchildren stories of the trials he encountered during his time at war and would wear his Korean War Veteran cap with pride. After the war, Francis came home and met Billie and they were married in 1954.

He was an avid craftsman and worked as cabinet maker for years before starting his own company, Lindseys Cabinet Shop with his son, Randy, in 1984. After retiring, Mr. Lindsey spent time in his wood shop creating one-of-a-kind wood pieces. He and his wife, Billie, spent years attending craft fairs and flea markets to display and sell his special items and her special baked goods. His most beloved creations were his unique dough rollers that he would craft from various woods. Some dough rollers would be crafted from over 300 individual wood pieces and would vary from different types of woods that were native to Mississippi. Each was its own special piece of art and each had its own story to tell.

He is survived by his wife of 68 years, Billie Frances Lindsey, his three sons,

Expressions of sympathy may be sent to the family @www/watersfuneralservice.com