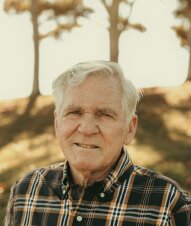 Ed served his country and fought in Vietnam where he was awarded the National Defense Service Medal, Vietnam Service Medal, Vietnam Campaign Medal, and Army Commendation Medal. Ed retired from the armed forces as a Sergeant (E5) on November 29, 2005. His military service for Army and National Guard combined totaled 34 years, 10 months, and 5 days. How fitting for him to pass away on Flag Day. He was an active member of V.F.W. Post 3806.

Ed was a hard worker, and was always ready to lend a hand. Working as an electrician at Doss Electric proved quite handy, especially when his daughter and son-in-law built their house and then again when his grandson and granddaughter built their house. Bonnie said “he was cheap labor, but we did it his way.” Ed retired from Doss Electric, but did he REALLY? He was constantly called and freely gave of himself and his time.

Ed loved his family and was extremely proud of ALL their accomplishments. Nothing made him more proud than to brag on kids and grandkids. They each held a special place in his heart.

Ed was preceded in death by his wife of 45 years, Joyce A. Brown; son, Jesse Brown; parents, Claude and Vivian Brown; and brother, Jim Brown.