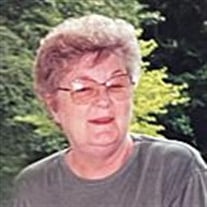 Aberdeen – Alice Maud Hawkins, 88, passed away on Monday, June 20, 2022 at the North Mississippi Medical Center in Tupelo. Born on March 25, 1934, she was one of eight girls born to the late Irvin and Inez Blaylock Dodd. She attended Greenwood Springs Schools. She drew the eye of John” Buddy” Hawkins and at the tender age 16, they were married on May 1, 1950. Together, they were blessed with three daughters and two sons.

Alice was a member of Riverbend Baptist Church. As the children were growing up, she sewed at the garment factory. After the children were grown, she was able to stay at home and be a homemaker. She was outspoken but you could always depend on her being honest with you. She enjoyed cooking especially her chocolate fudge cake. Her family will continue to enjoy her delightful cake since she shared her recipe for them to cherish. She liked to work with her hands and spent a lot of time sewing and quilting. Alice was a devoted QVC shopper and would sit hours at a time watching the sales. She loved to play cards. One of her passions was to write poems and to put music to her songs. She enjoyed country music, especially Randy Travis.

Her family meant the world to her. She was thrilled when they all came to see her. In addition to her children, she was blessed with 9 grandchildren and numerous great-grandchildren and great-great grandchildren. She will be missed and will always carry a special place in their hearts.

In addition to her parents, she was preceded in death by her husband, John “Buddy” Hawkins who died on December 30, 2021; sisters: Frances Price, Martha Ann Carter, Maxine Croom, Earline Perry, Mae Robertson and Sarah Sanders.

Graveside services have been set for 10:30 A.M., Wednesday, June 22, 2022 at Camp Cemetery with Bro. Mark Robbins officiating. Visitation for Alice Hawkins will be from 9:00 AM until 10:00 AM at E.E. Pickle Funeral Home in Amory.

In lieu of flowers, donations may be made in her memory to Gideons International.

Condolences and memories may be shared with her family at eepicklefuneralhome.com.