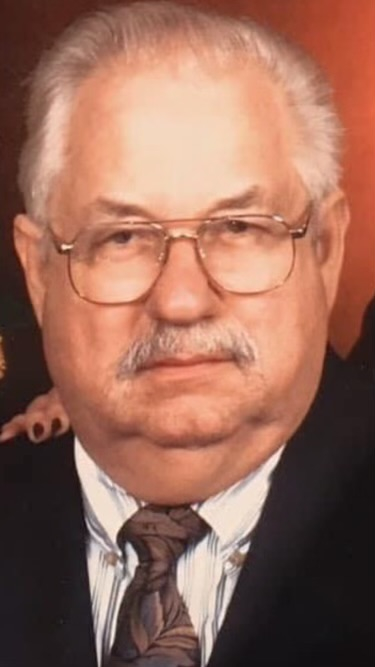 David Kenneth “Ken” McVay, 82, departed this life for his life eternal on Saturday, July 2, 2022 from Sanctuary Hospice House in Tupelo. He was born in the Black Zion Community of Pontotoc County on May 30, 1940 to Barney and Lona May Stuart McVay. His father died when he was 9 month old and his mother relocated the family to the Randolph Community near her relatives. Ken graduated from Randolph High School in 1958  Ken was the husband of Peggy Glasgow McVay, to whom he married on June 30, 1960. He was father of David McVay and Missy McVay Brown and Paw to his beloved grandchildren.  The McVay family made Okolona their home in 1963. He spent over 42 years in the sales and repair of Industrial sewing equipment, working in local garment and furniture businesses.  He was employed by the Cutter’s Exchange, which later merged with Singer Sewing Machines.  During his long tenure of over 42 years, he was named top salesman in his region several times.   Ken, a patriotic American and devoted community leader, served 20 years on the Okolona Board of Aldermen, where he was a voice of reason and progress. He was an active member of Prairie Lodge # 87 where he was Worshipful Master several years.  Ken was a faithful member of the First Baptist Church-Okolona where he served as a deacon and Sunday school teacher. A great southern storyteller, Ken made a difference in the lives of his family, his work associates and the greater community.  He will be missed!

A service celebrating his life will be held at 2 PM Thursday, July 7, 2022 from the First Baptist Church of Okolona with Rev. Dr. Randy Lewman and Rev. Dr. Roy McHenry officiating. Burial, with Masonic honors, will take place immediately following at East Chickasaw Memorial Gardens.  Visitation will begin at Noon Thursday until service time at First Baptist- Okolona. Holland Funeral Directors-Okolona is honored to be serving their friends.

Ken is survived by his wife of 62 years, Peggy Glasgow McVay; his son, David Winborn McVay and wife, Brenda of Van Vleet; his daughter, Missy McVay Brown and husband, George of West Point; his grandchildren, Shelbie Brown, Stuart McVay and Ellis McVay and wife, Katie; two great grandchildren, Jackson and Jake McVay;  a sister, Barnie Mae Gann of Houston.  He was preceded in death by his parents, Barney and Lona Mae McVay.

A Memorial Tree was planted for Ken