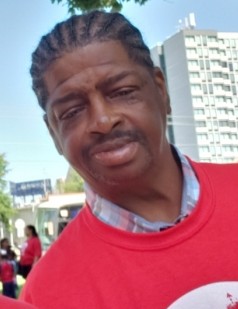 Mr. Major Hugh Adkins, 66, transitioned on Monday, August 3, 2020 at North Mississippi Medical Center in Tupelo.
Major Hugh Adkins was born on April 16, 1954 to the union of Rivous and Lilla Adkins of Blue Mountain, Mississippi. Major was the youngest of three children.

Major was united in holy matrimony to his beloved wife, Mamie J. Thomas Adkins on May 17th, 1981 for almost 22 years. He also accepted Christ into his life and joined the United House of Prayer in Blue Mountain, Mississippi.
Major enjoyed being with his family and friends during his life and never met a stranger.  He was not one to boast about all the blessing that he bestowed onto others when they were in need. He was a kindhearted, eazy going, caring free, and loving person. He loved to laugh and smile while in the presents of others.
He was preceded in dealth by his wife, Mamie J. Thomas Adkins.

Those left to cherish his memories include: Two sisters: Amanda Fay Bogan of Blue Mountain, MS and Barbara Green of Belleville, IL. Two nephews: Thomas Moore Jr. of Belleville, IL. and Dartaneion Green of St. Louis, MO. Two neices: Michelle Carter of Ripley, MS and Ashley Cheairs and of Blue Mountain, MS. Six great nephews and eight Great neices; and also three great great neices. And one great great nephew and neice, plus a host of cousins, other relatives, and friends.
Major Hugh Adkins will be greatly missed and we will always love him and the footprints he left behind.

Private Graveside Service will take place on Saturday, August 8, 2020 at United House Of Prayer Church Of The Lord Jesus Christ in Blue Mountain, MS. Serenity-Simmons Funeral Home of New Albany is in charge of the arrangements.

Visitation will be on Saturday, August 8, 2020 from 10a.m. until 11a.m. at United House Of Prayer Church in Blue Mountain.